Hi! I am Pam, from Pams Party Planning and Practical Tips.  A few weeks ago Mique, wrote a post about April being Autism Awareness month.  I contacted her when she wrote the post to share our story.  I too, am a mom who has child on the spectrum. 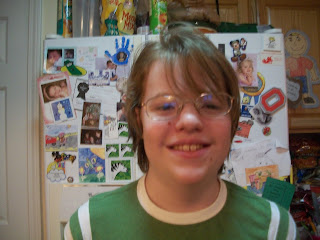 This is my son Kyle.  He is just about to turn 13, and has Aspergers.  We were actually pretty lucky in our journey.  We found out in steps, over a span of a  few years.  When he was 2 1/2 he was extremely smart, but we could not understand him.  He would have massive meltdowns, and liked to run in not so safe situations. (Imagine me at 9 months pregnant  trying to catch a super quick 2 year old in the public library).  He was tested and qualified for Early On, but unfortunately he quickly aged out when he turned 3.  At preschool, his young preschool teacher noticed that the meltdowns occurred most when his routine was disrupted.  She also said she was shocked when he explained what a crescent moon was at age 3. We moved across the state when he was 4.  His new speech teacher immediately noticed he had sensory issues. He would spin in circles, had an unusual grip, could not sit still, was easily overwhelmed etc.. Within 7 weeks of moving, Kyle was being tested by the school system.  He definitely had S.I.D. aka  Sensory Integration Disorder.  There was a huge gap between his cognitive abilities and his motor skills.  He qualified for the special preschool, and he was given his  first I.E.P.   Because he had an I.E.P before kindergarten, he has qualified for services at school.  At first he had an E.C.D.D label (Early Childhood Development Delay) In kindergarten, his O.T. told me off the record she was seeing signs of Aspergers. She wanted me to know, so I would have time to learn more about it, and keep an eye on it.  In 2nd grade it was time for retesting.  He amazed the psychologist that administered the test yet again. His cognitive ability was off the chart.  He was 99th percentile in almost every area.  She admitted to me she has not seen a child like this in her 20 years of working in the school. While exciting, it is also a bit scary knowing that your child is most likely smarter than you.  LOL!  His social speech, and his Autism test results did not come back quite as exciting.  He was 2-3 years behind in social speech and he tested in the mild to moderate range on the Autism test.  Pretty much his Aspergers was right there in black  and white.    He has now in 7th grade.  While the last few years have been bumpy at times, we have been blessed with many wonderful parapros and staff members. 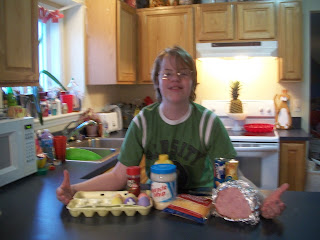 I shared with Mique that recently because of learning about nutrition in health class at school, Kyle suddenly turned into the food police. He wanted everyone in the family to only eat healthy food.  I suggested to him that he come up with healthy recipes that he would be willing to eat, and our Cooking with Kyle series was born. Each week, he has one of his own recipes  featured on my blog.   Mique said she would love to feature one on her blog for Autism Awareness Month.  Kids on the spectrum are capable of doing so many things, maybe even becoming a well known chef some day. 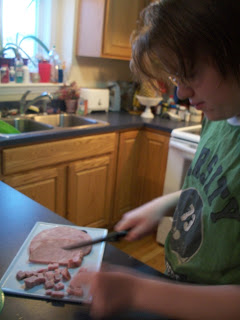 He decided to use Easter leftovers to make Ham and Cheese Bundles with Deviled Eggs as a side dish.   He made the entire recipe by himself, with almost no help from me.  He only had me peel the eggs and help seal the bundles.   He cut up the ham into cubes using a sharp knife. Eek!  A bit scary, but he was ready. 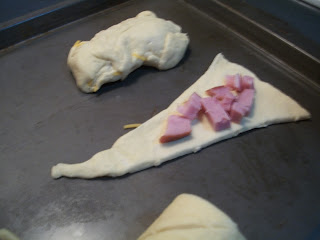 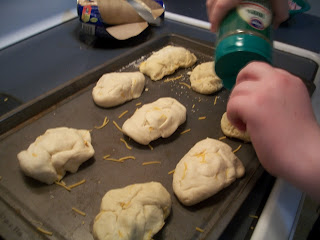 He sprinkled the bundles with grated parmesan. He then placed  them in a preheated 350 degree over  for 15 minutes. 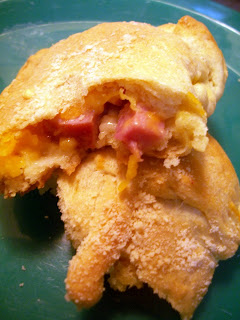 His ham and cheese bundles were delicious, and enjoyed by the entire family. He also made us deviled eggs.    I have the full tutorial and step by step pictures on our blog,  so we don’t take over Mique’s blog with too many pictures.     In recent weeks he has also made his own healthy recipes for chicken salad, breakfast burritos, beef burritos, and  grilled turkey and cheese. All have turned out really good, and I would love for you to come by and see them.

Thank you Mique, for featuring Kyle. He is very excited that his recipes are being recognized and enjoyed by so many people.

Pam it was my pleasure! So happy to have Kyle share his love of food here.

Puzzle Cake Tutorial from Bird on a Cake