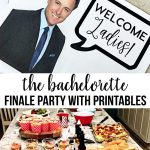 Ready to watch the Bachelorette Finale?  Gather your friends and throw a party with some of my ideas and printables! 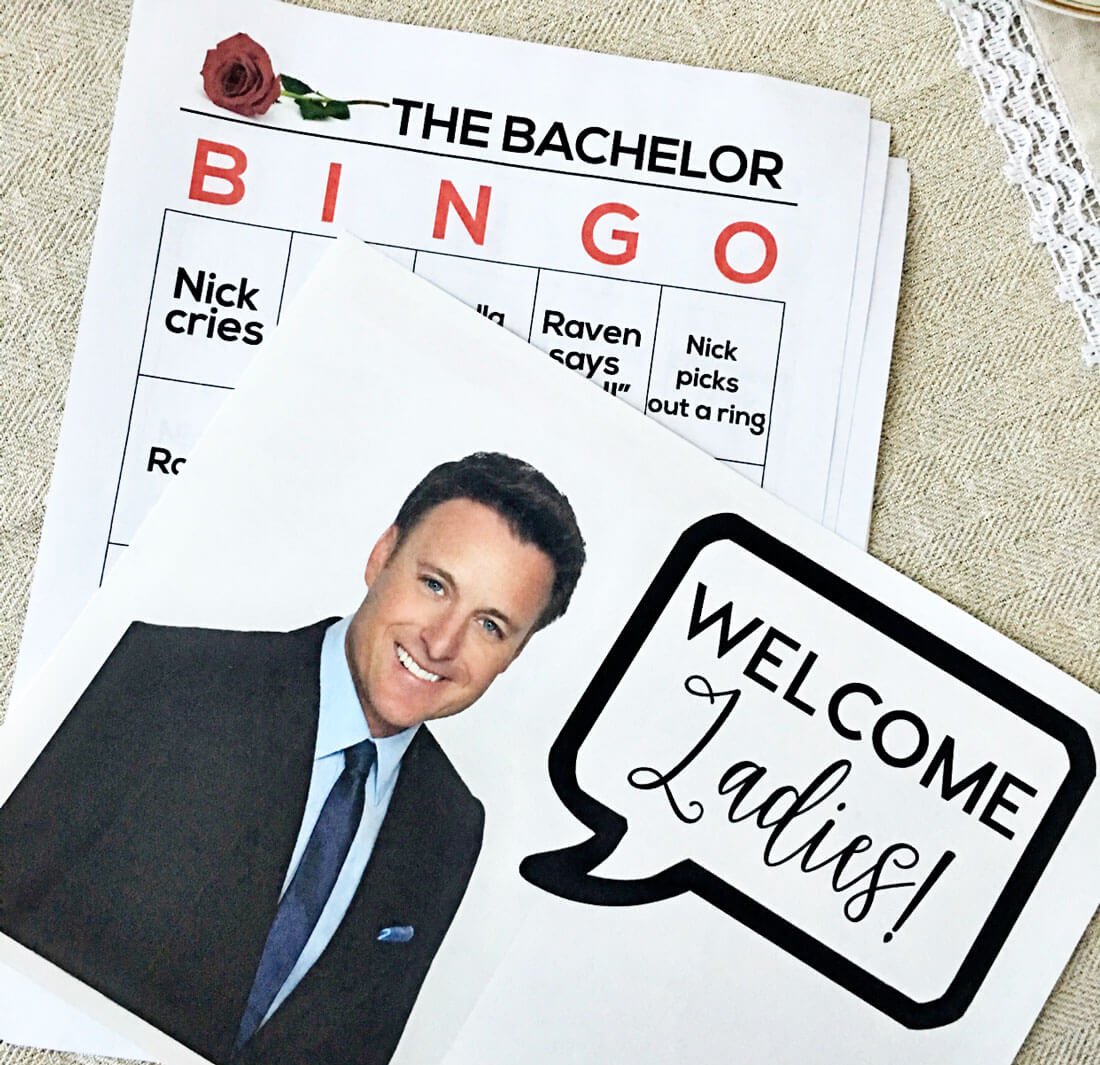 Years and years ago a new show started airing called The Bachelor.  It was a crazy concept of one guy dating 25 women to find his true love.  Of course I was hook, line and sinker for mindless tv.  The network cashed in on the concept and created The Bachelorette.  And now over 20 seasons of the series and all kinds of spin offs later, we’re at another Bachelorette Finale.
I admit, it’s not quality television.  I watched it for years and then stopped because it was so ridiculous.  But somewhere over the last couple of years I got into it again and now my friends and I talk about it each season.  Last season with Arie almost did me in.  I told my friends that it was so over the top and stupid that I couldn’t do it anymore.  And yet, here I am with Becca’s season… sigh. 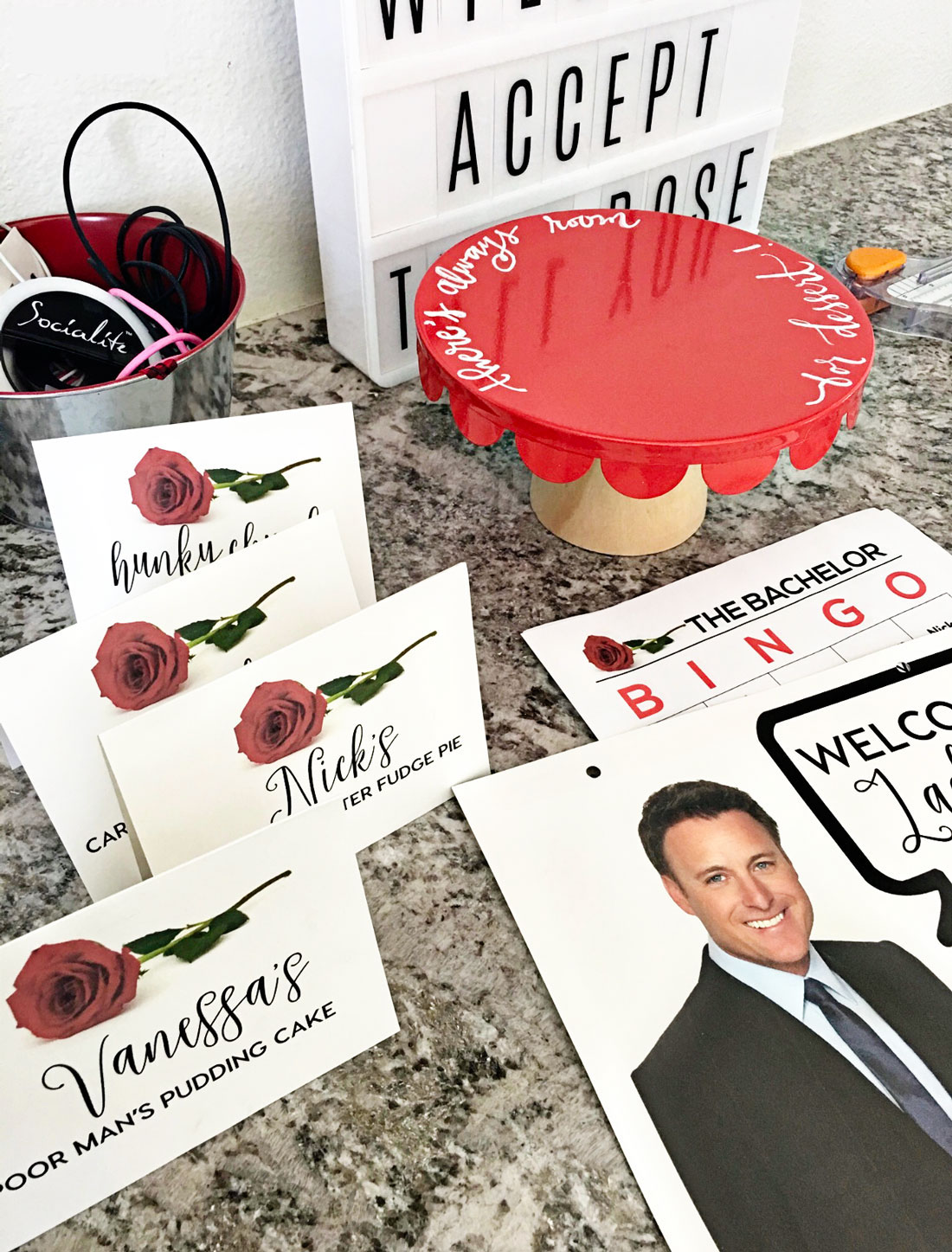 Awhile ago I decided to have some friends over for the finale of the Bachelor and it’s become a little tradition.  I make food, games and we watch some really ridiculous tv.  It’s more about getting together and relaxing than anything.  Lately I’d really rather watch British TV shows anyway. 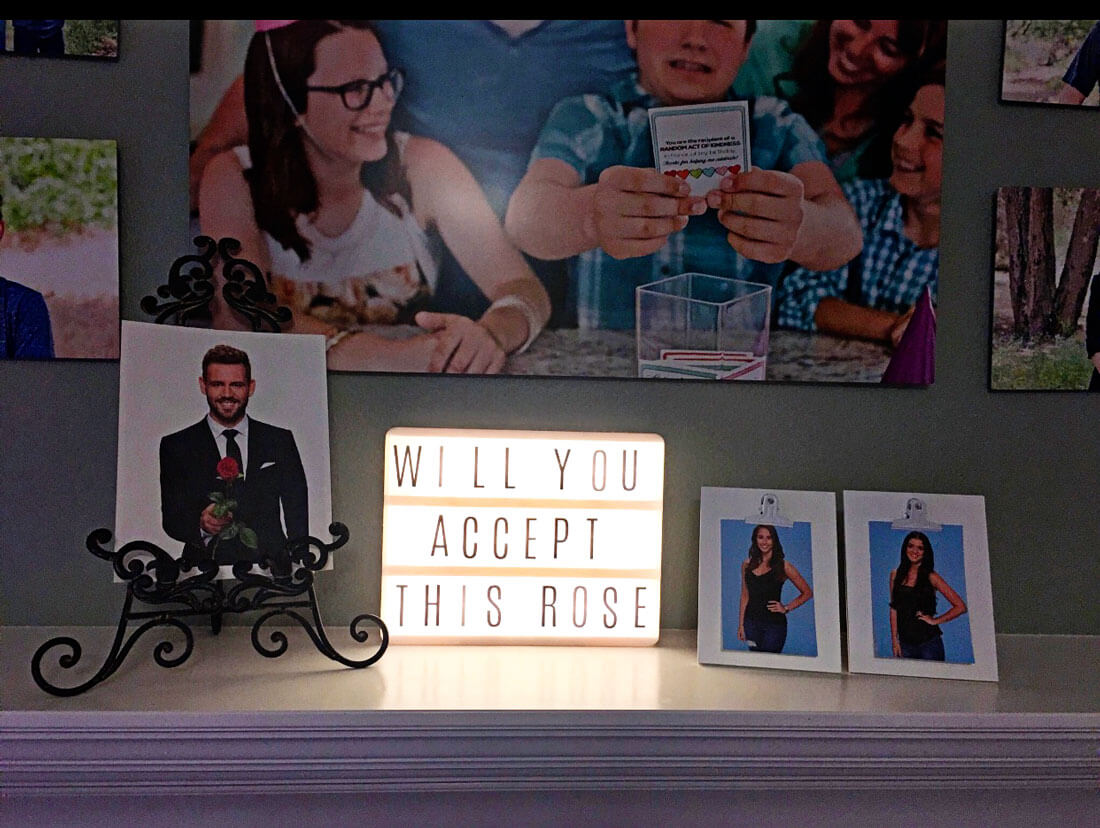 If you’re going to watch with your friends, you might as well make it a party, right? In anticipation of the most dramatic finale ever, I created some printables to use and share.  And since it hasn’t happened yet, I don’t have pictures of the finale party but I do have pics from the last few finales so you can get a feel for what I did and recreate something similar. 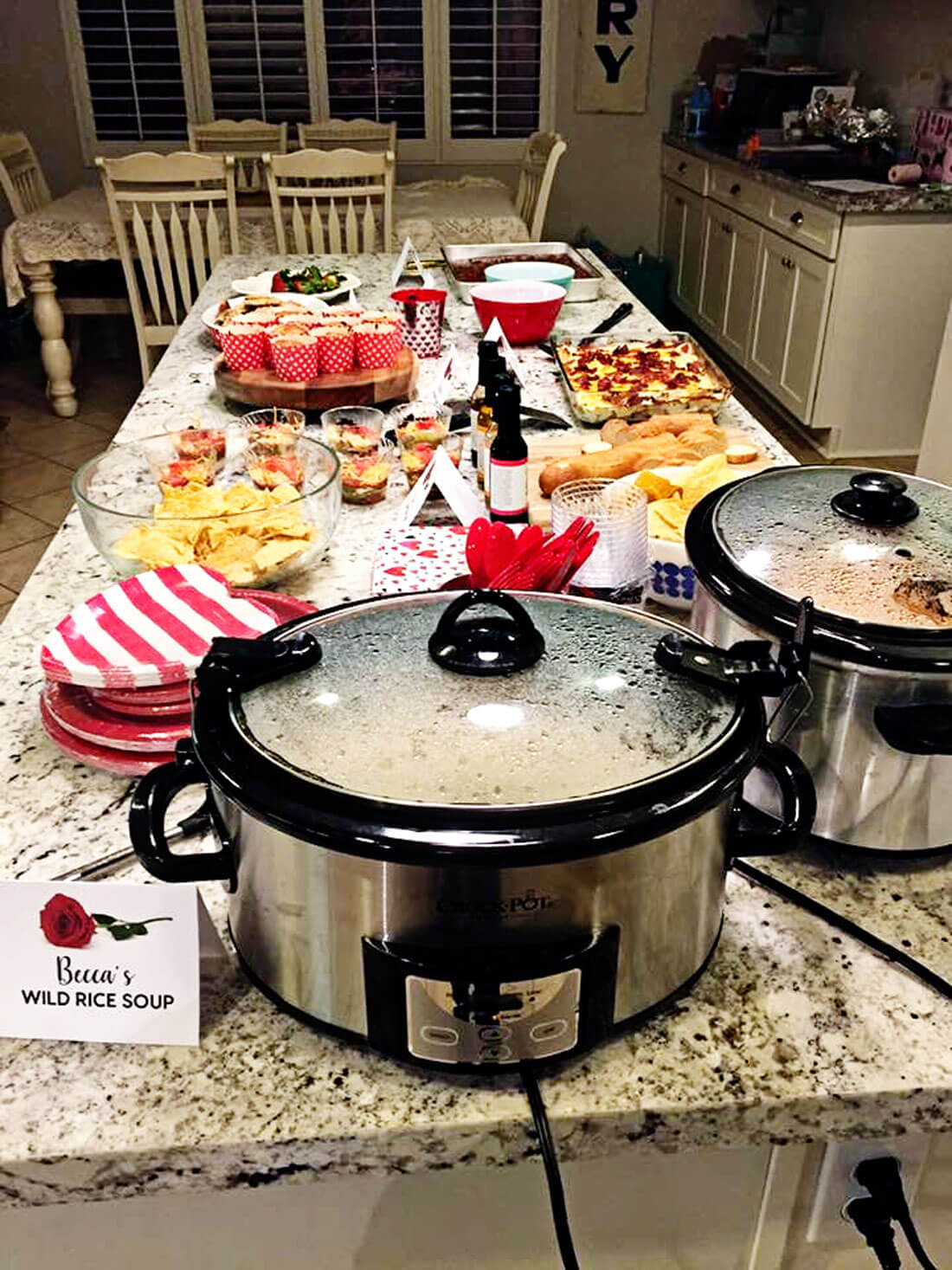 I love to make treats and sweets so of course that has to be front and center for the finale.  Each time I have found recipes for food of where the Bachelor/Bachelorette and their last two have been from.  For Nick’s season, I did some food from Wisconsin, food from Montreal, and southern food for Raven.  Last season it was food for Arie in Arizona, Becca from Minnesota and Lauren from Virginia.
I then come up with clever names for the food like – “Nick’s Salty Caramel Rice Krispy Treats” (from all the tears he cried). 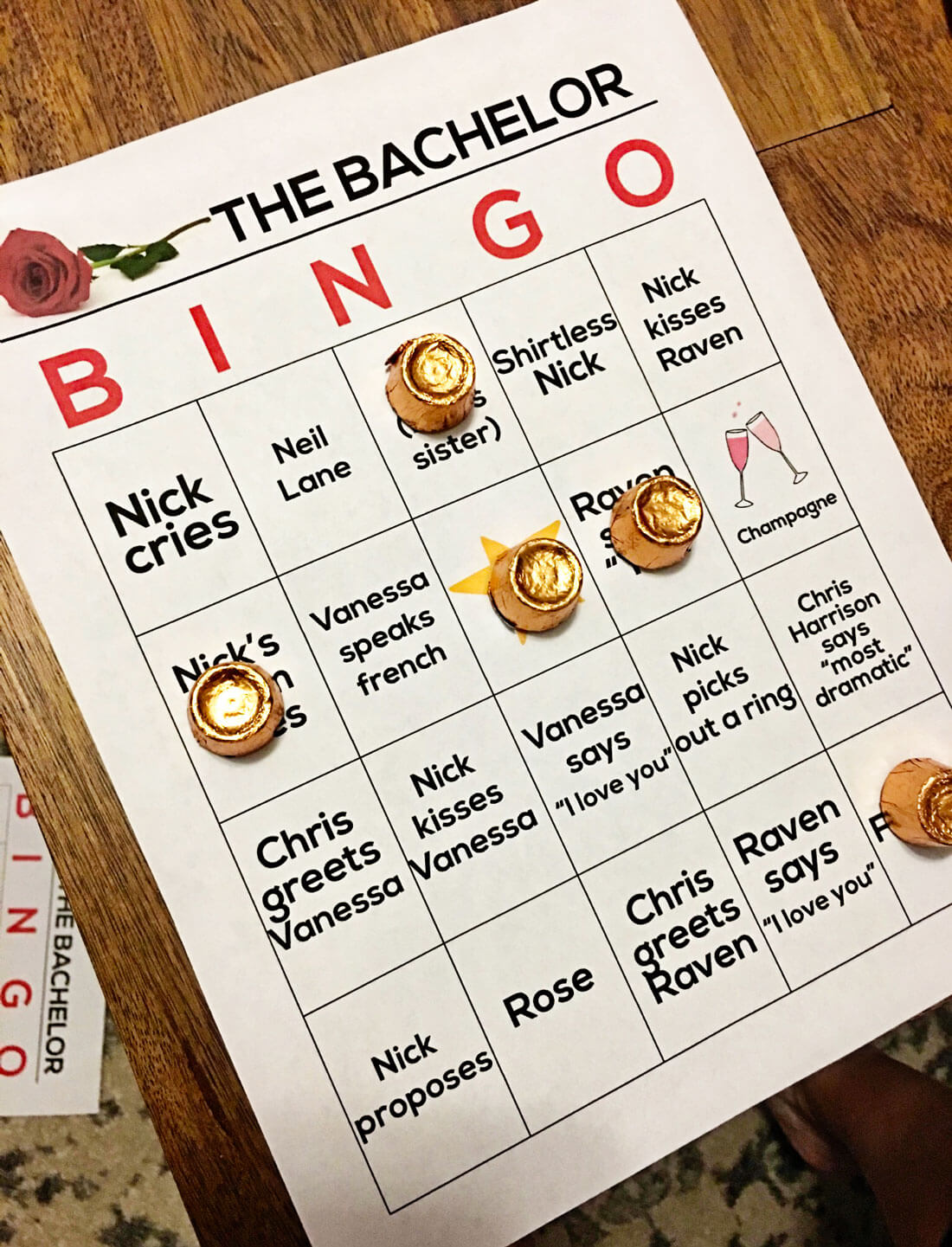 I also make BINGO sheets and have small prizes for the winners.  It’s something silly but fun to do while you’re watching the show.  Each friend gets a ring pop and candy is scattered throughout my home.

Download a pack of Bachelorette Finale printables.  For personal use only.