If you’re looking for the most relaxing, beautiful place to visit, the island of Kauai is for you! 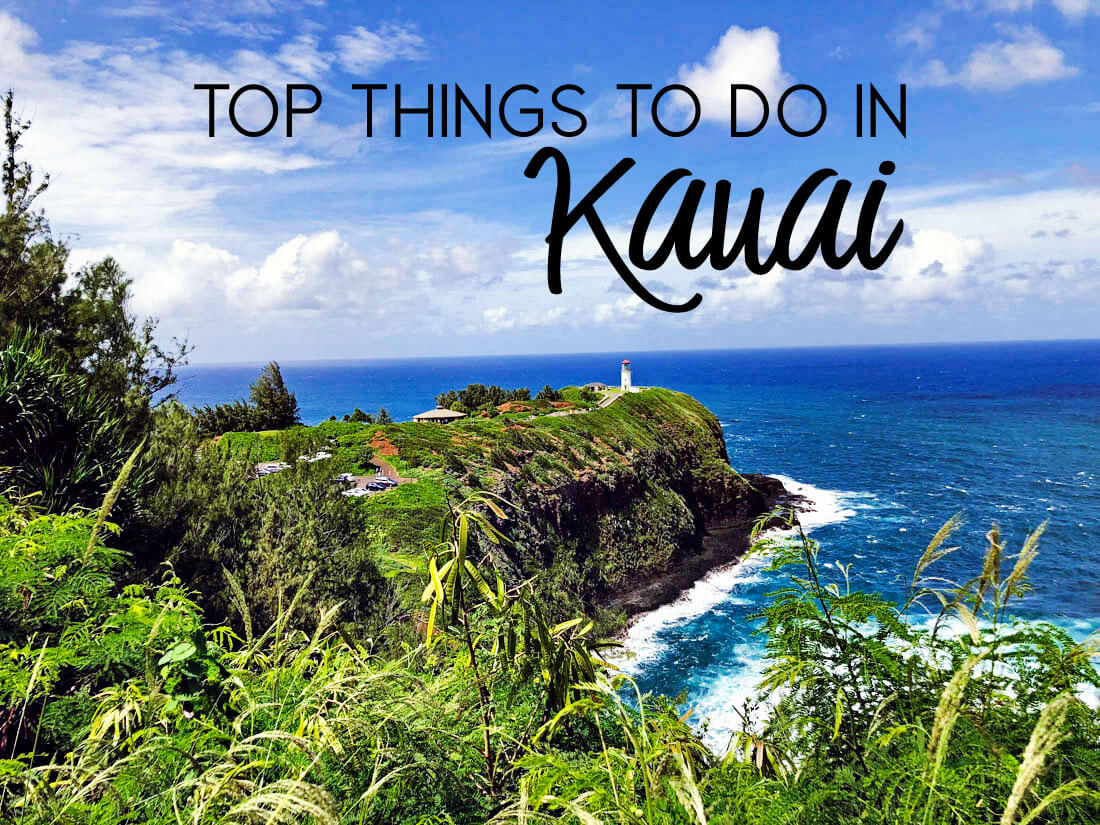 Warning: I’m about to overload you on the most beautiful place on earth, Kauai.  I have been all over the world and even though I love visiting other places, my heart belongs to this island.  With mountains for Josh and the beach for me, it is the perfect spot for both of us.  It is what you would envision Hawaii to be like.  Some quick facts for you:

Have a trip coming up?  Here are some of our favorite things we did on our 20th anniversary trip:

One of the best things about Kauai are the incredible hikes.  There are so many hikes all over the island with all different levels of activity.  Unfortunately because of the flooding earlier this year, everything on the north side past Hanalei is closed down, including the NaPali Coast hikes.   Because of this, Josh did research to find some “easy hikes” that we could enjoy.  I put “easy” in quotation marks because in the end we found it not easy at all… but still worth it. 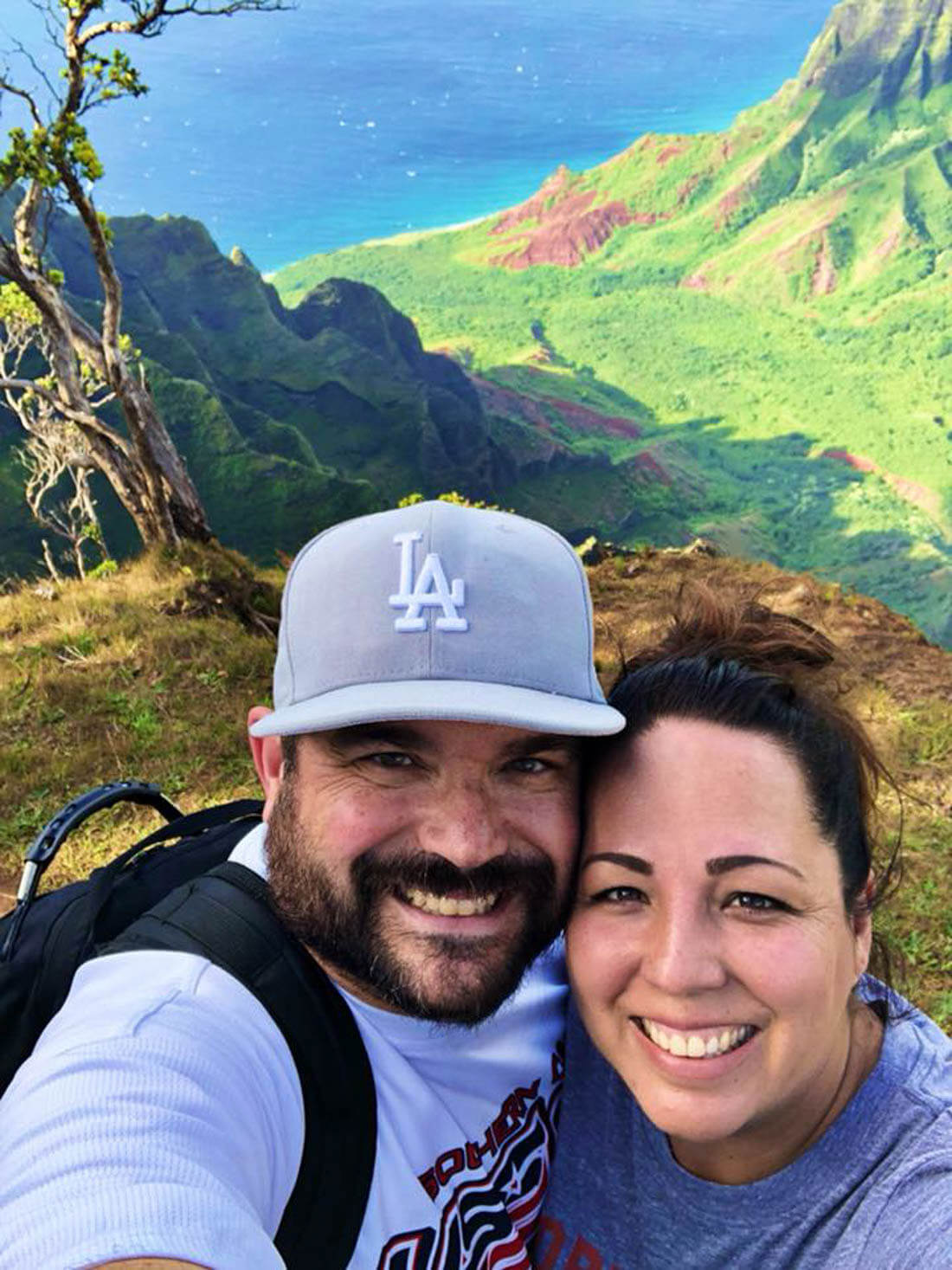 Kalepa Ridge Trail – seeing the NaPali Coast from the south side of Kauai
Originally we weren’t even sure we were at the right spot for the trail.  We knew we had to go way up in Waimea Canyon but it just kept going and going and going.  We found out later that it’s considered an unofficial trail and isn’t maintained by the island.  It’s a hunter access route where people hunt for pigs or goats (though we didn’t see either on our hike).

Even though it was more challenging than we expected, it was still one of our favorite things that we did and worth it! But we’ll probably hike some other trails next time.

On our last trip we discovered Polihale State Park thanks to our rental car company.  It quickly became our favorite spot on the island.  This time – we had quite the adventure going to Polihale.  It’s off of a dirt road at the very far west of the island and you can see the NaPali Coast from the south side.  Let’s just say – we got our car stuck in the sand- and thanks to some locals, we got out of the sand.

We have stayed on the north side of the island a few times now and had never been to Queens Bath.  It’s a tide pool surrounded by igneous rock.  You have to hike to get to it and though it’s not long, it’s a little tricky because it’s slippery and there are big roots in the ground.
We’ve seen Queens Bath from above but for some reason never made it there.  This time I was determined to get there and so we made it happen.  I’m so glad we did!! 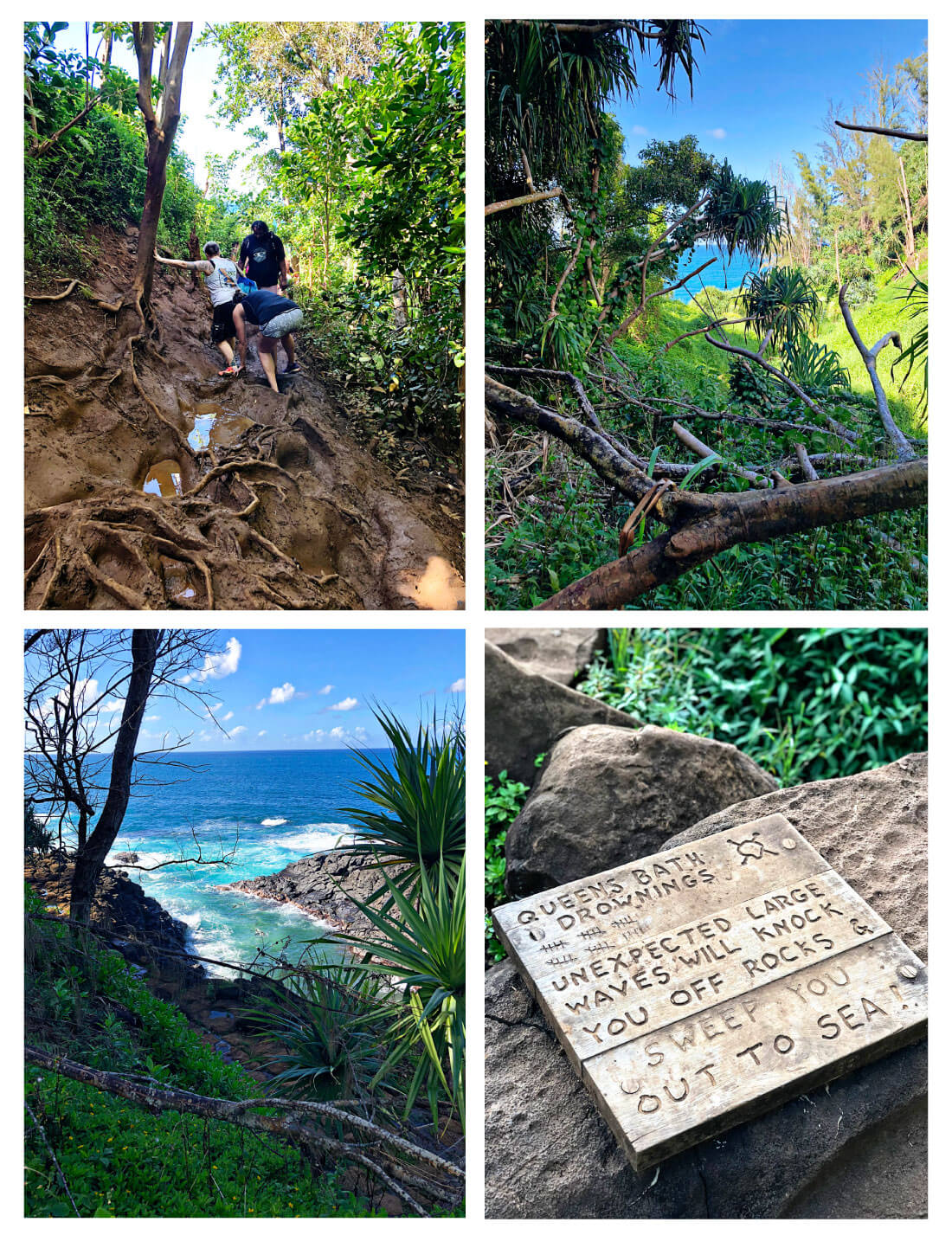 Josh and I hung out for about an hour in the sinkhole.  The water temperature was perfect, there were fish swimming around us and it was really fun.  We definitely want to go back next time we go to Kauai! 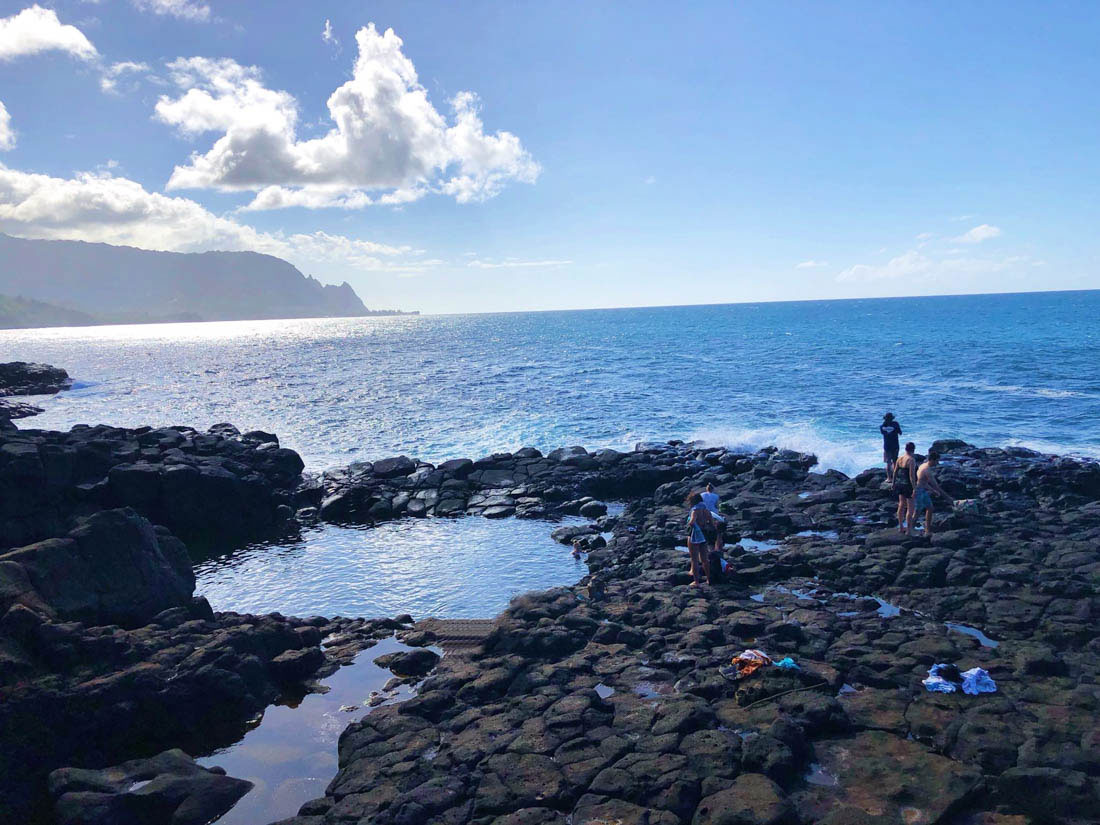 We heard about Wailua Falls from our tubing excursion (below) and since it was close to where we were, we stopped to check it out.  The falls were pretty and only took a few minutes out of our day.  Supposedly it is a completely different experience if you hike it, but we weren’t prepared for that.  Worth a try next time! 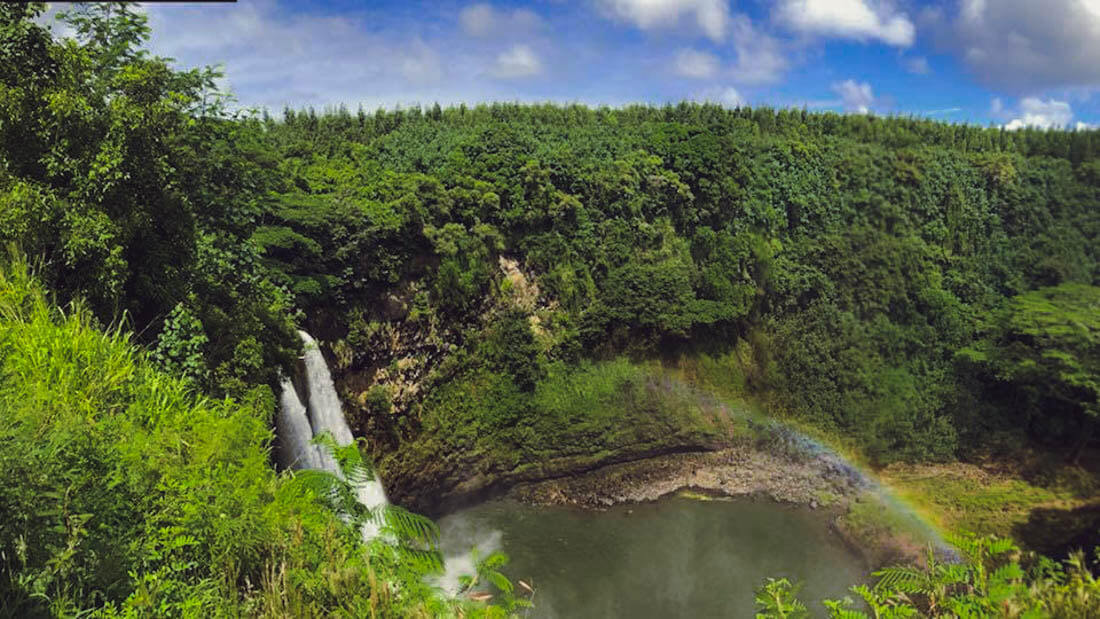 Tubing down the Sugar Cane Canals with Kauai Backcountry Adventures

After seeing videos on Facebook for tubing down old sugar cane canals on the island, we knew we had to go.  Kauai Backcountry Adventures does ziplining as well but they are the only place that does tubing like this.  It’s really well organized – with a system in place for everything and options to rent a GoPro to wear as you float down the tubes. 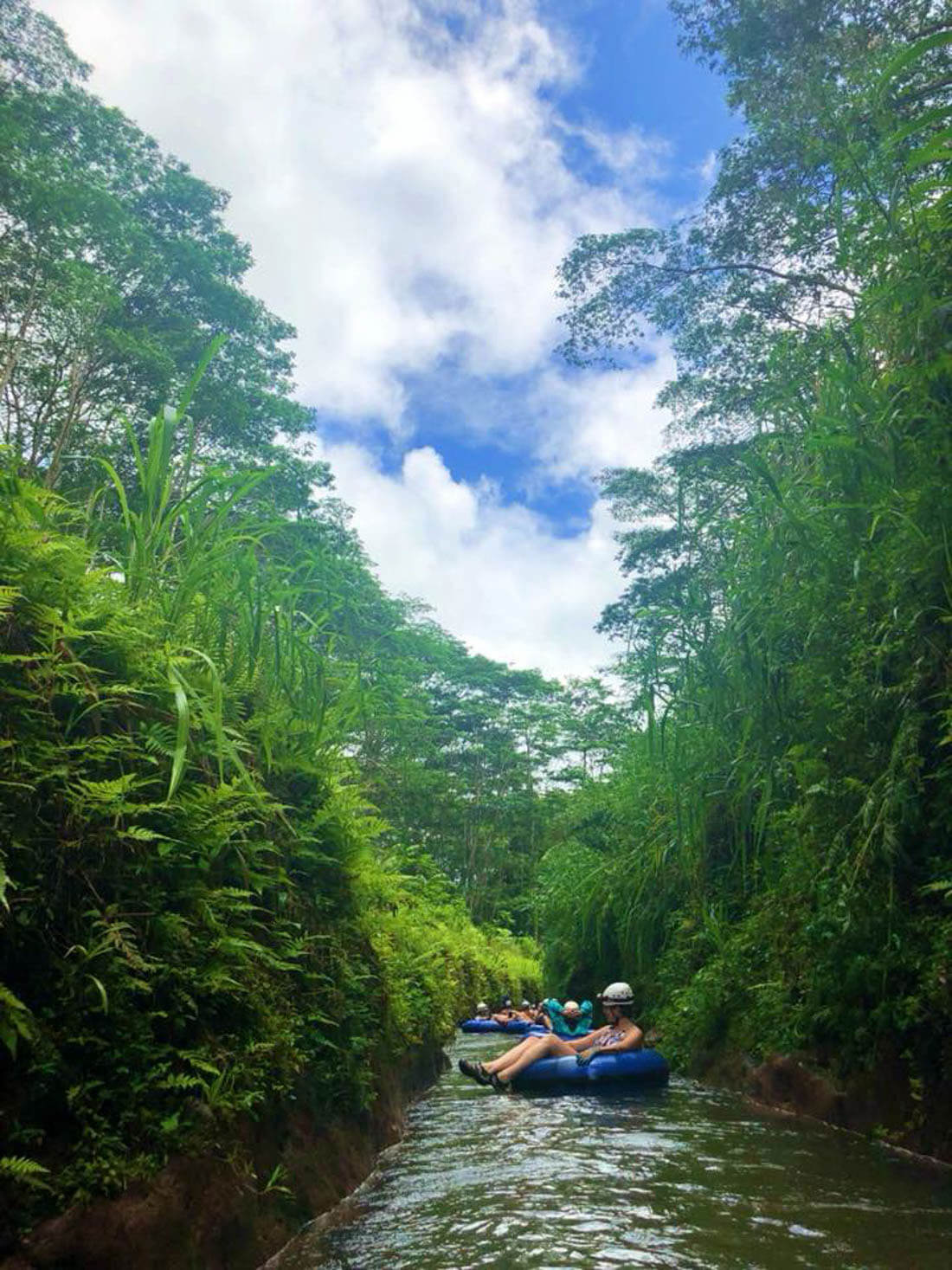 Josh has been into golf for a long time.  Last trip he went to Poipu Bay Golf Course on the south side of the island.  For this trip, we were mainly on the north side and he knew he wanted to golf at Makai Princeville Golf Club.  It ranks as Top 100 Greatest Public Golf Courses in America, the #3 in the state of Hawaii and were named to the list of America’s “Top 5 Great Golf Settings” by National Geographic.  And let me tell you – it lives up to all of that. 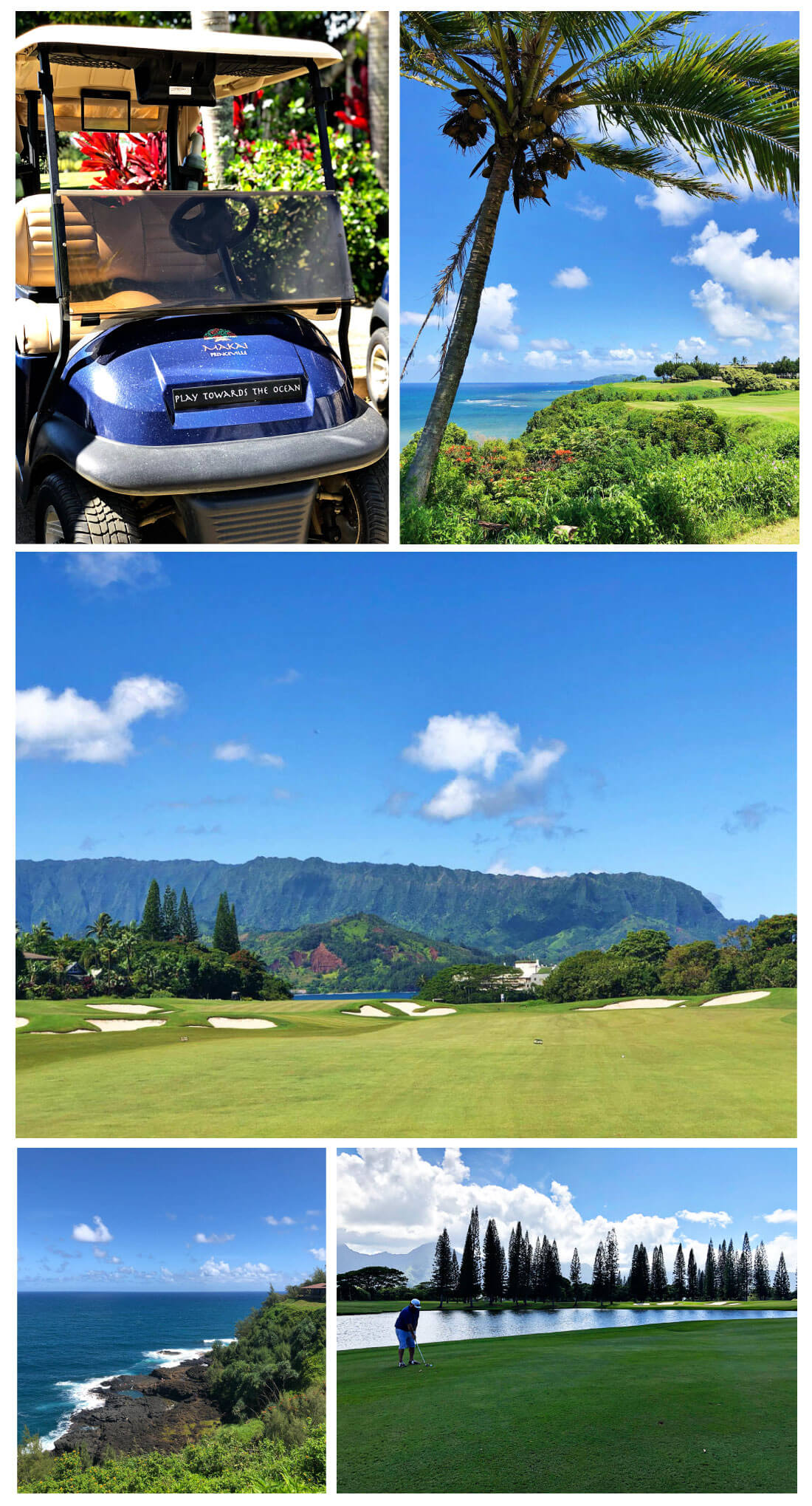 Since I don’t golf, I rode along for the day and took pictures the entire time.  I had hundreds of pictures because it was so breathtaking.  Being next to the ocean, above Queen’s Bath, in the woods and everything in between.. was incredible.

One of the things that we enjoyed the most about the trip was the Sunset Tour at the course.  The day we went it was supposed to rain, but we lucked out and it was AMAZING.  There were over 30 of us on golf carts with our tour guide, Tom.  He remembered everyone’s name and gave information about the island and the course.  Even though we’ve been to the island several times, we learned new things and saw things that blew our mind. 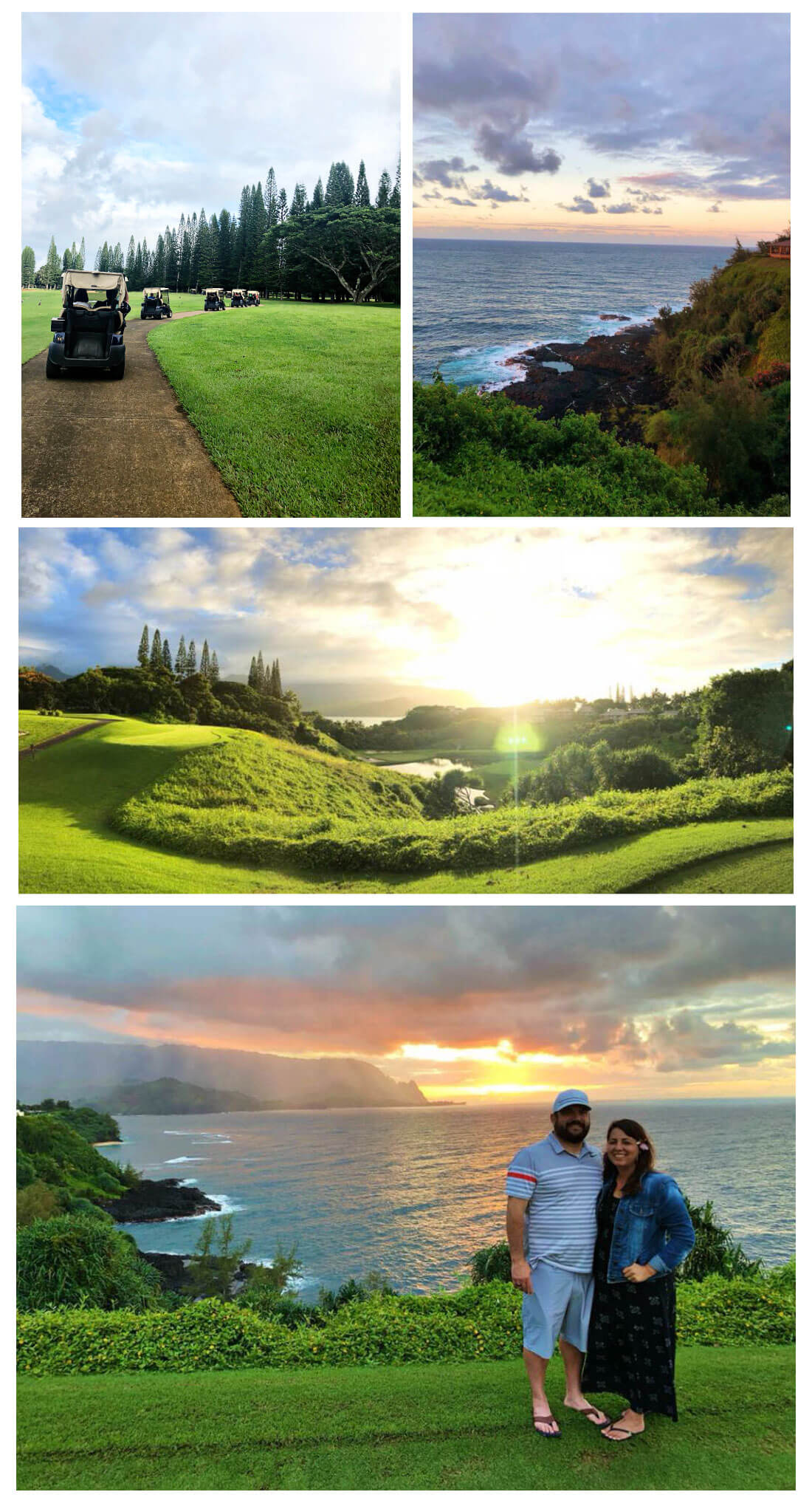 Probably the most known spot in the north, Hanalei Bay is so beautiful.  There are shops, restaurants, food trucks and of course the beach. 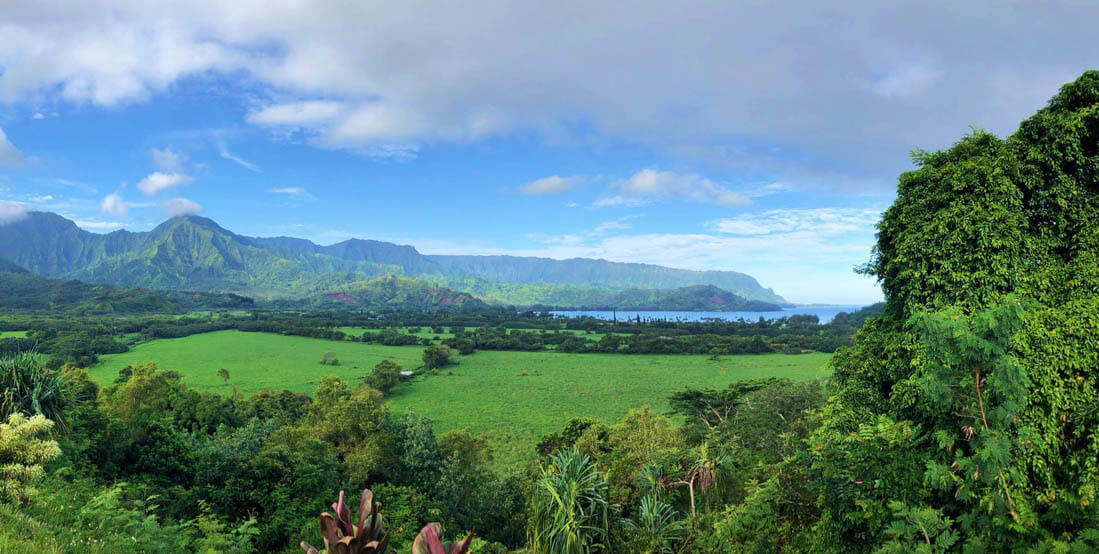 There is a picture spot on the way down to Hanalei Bay.  We pulled over and another couple offered to take our picture. We went the beach and to look at the pier because we love it – but sadly it is in the middle of construction from the floods earlier this year.

While you’re in Hanalei, drive past the Waioli Huiia Church.  It’s in a beautiful spot and it’s iconic on the island. 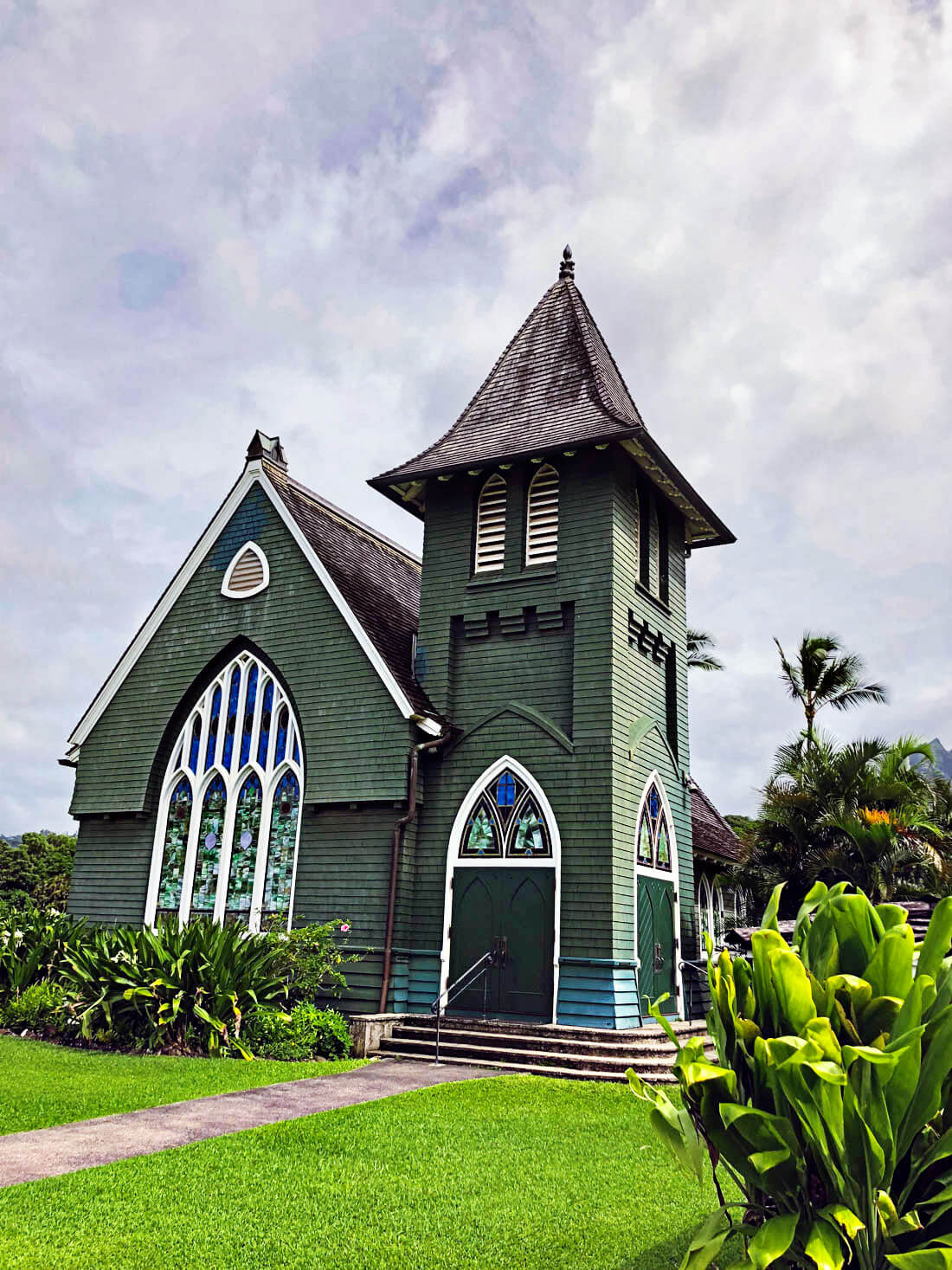 One of the best things about traveling is experiencing the food.  Kauai definitely doesn’t disappoint.  Every time we go, we find new spots to check out as well as go to our favorite places too.  There are tons of food trucks now on the island.  We referred to Yelp a lot and here were some of our favorites:

Kauai Ono in Princeville
This is a farm to table pop up restaurant.  The environment is really cool – as you walk in they seat you on a long table where you have the chance to meet new people.  We had fun talking to another couple about our love of the island all throughout our meal. 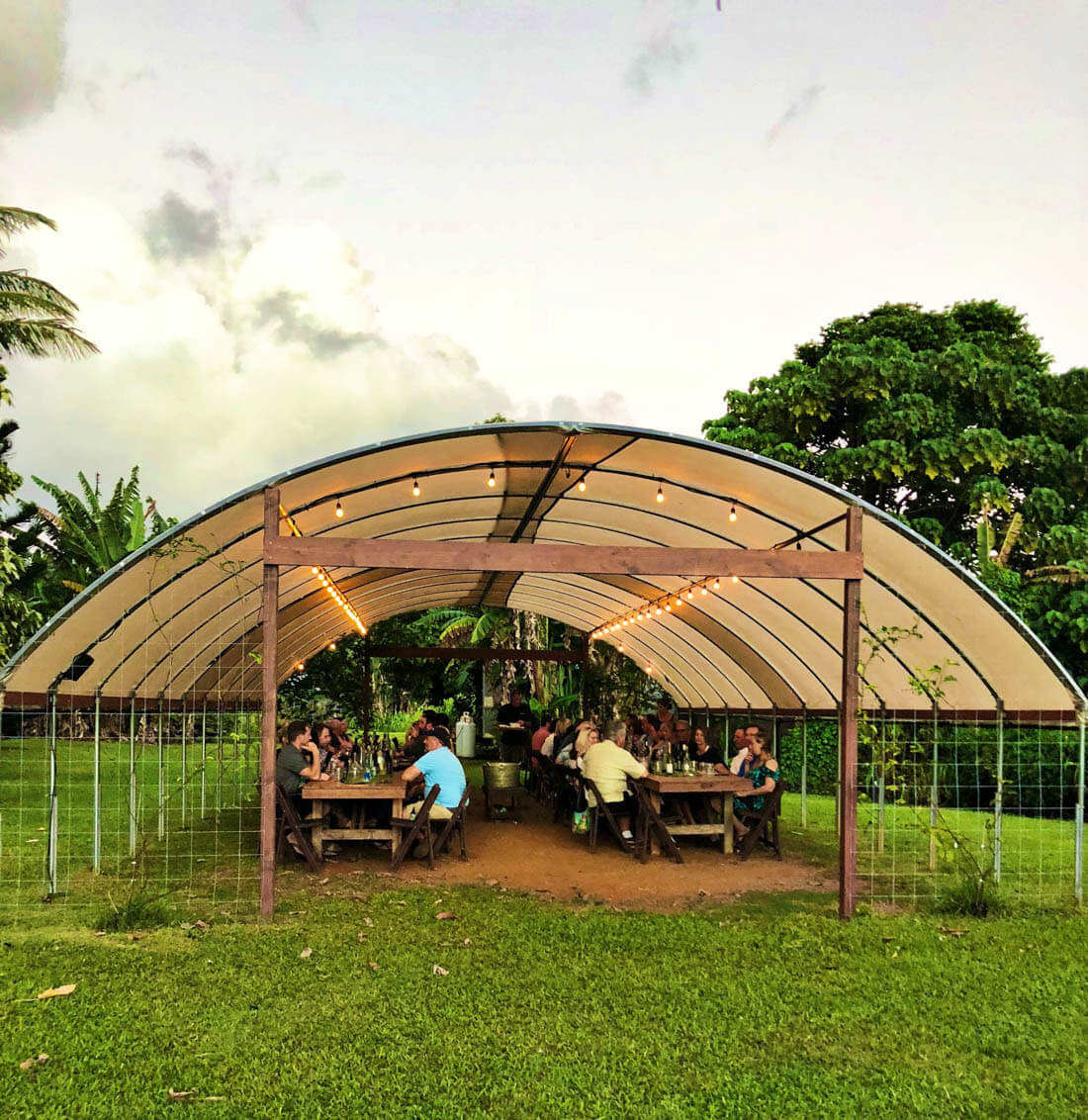 The chef presents each course and all of them were fantastic, unique and fresh.   A special treat was the hot chocolate and churros.  Oh my gosh – incredible!

Kauai Grill at St. Regis Hotel in Princeville
Josh and celebrated our anniversary dinner at the Kauai Grill.  We had the best meal of the whole visit that night.  There are several options but we ended up with pork belly, surf and turf, filet mignon, mashed potatoes (heavenly!!) and dessert.  To say we rolled out of there is an understatement. 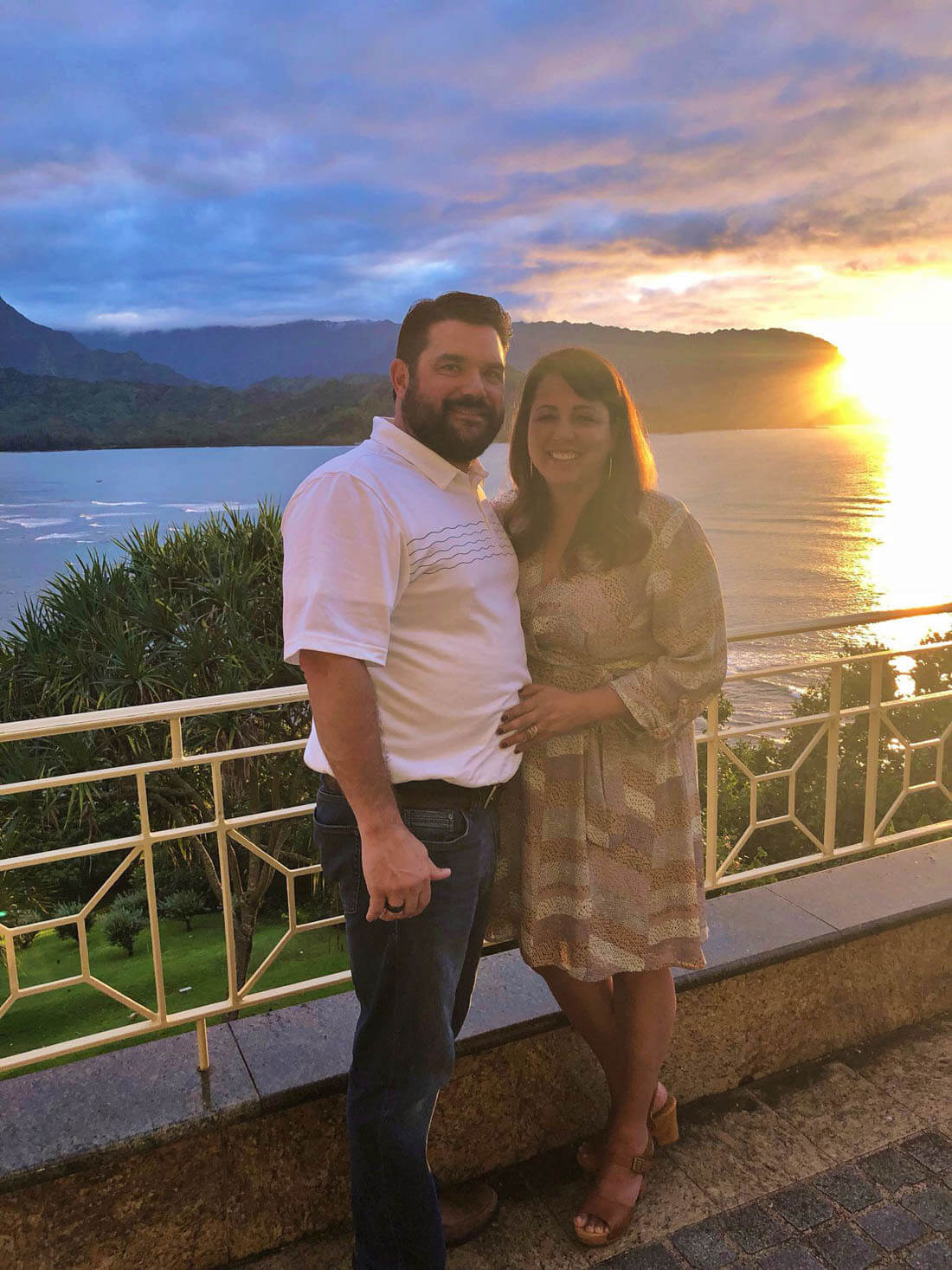 This is on the south side of the island and we drove down specifically to eat it.  While there are tons of poke options on the island, this bowl is SO SO SO good.  Josh got one for me when he went golfing last time and I’ve dreamed of it ever since.  It was the exact same as last time.  Fresh, perfect rice, yummy sauces and straight up perfection.
*You don’t have to play golf to get it – just go to the club house and order one! 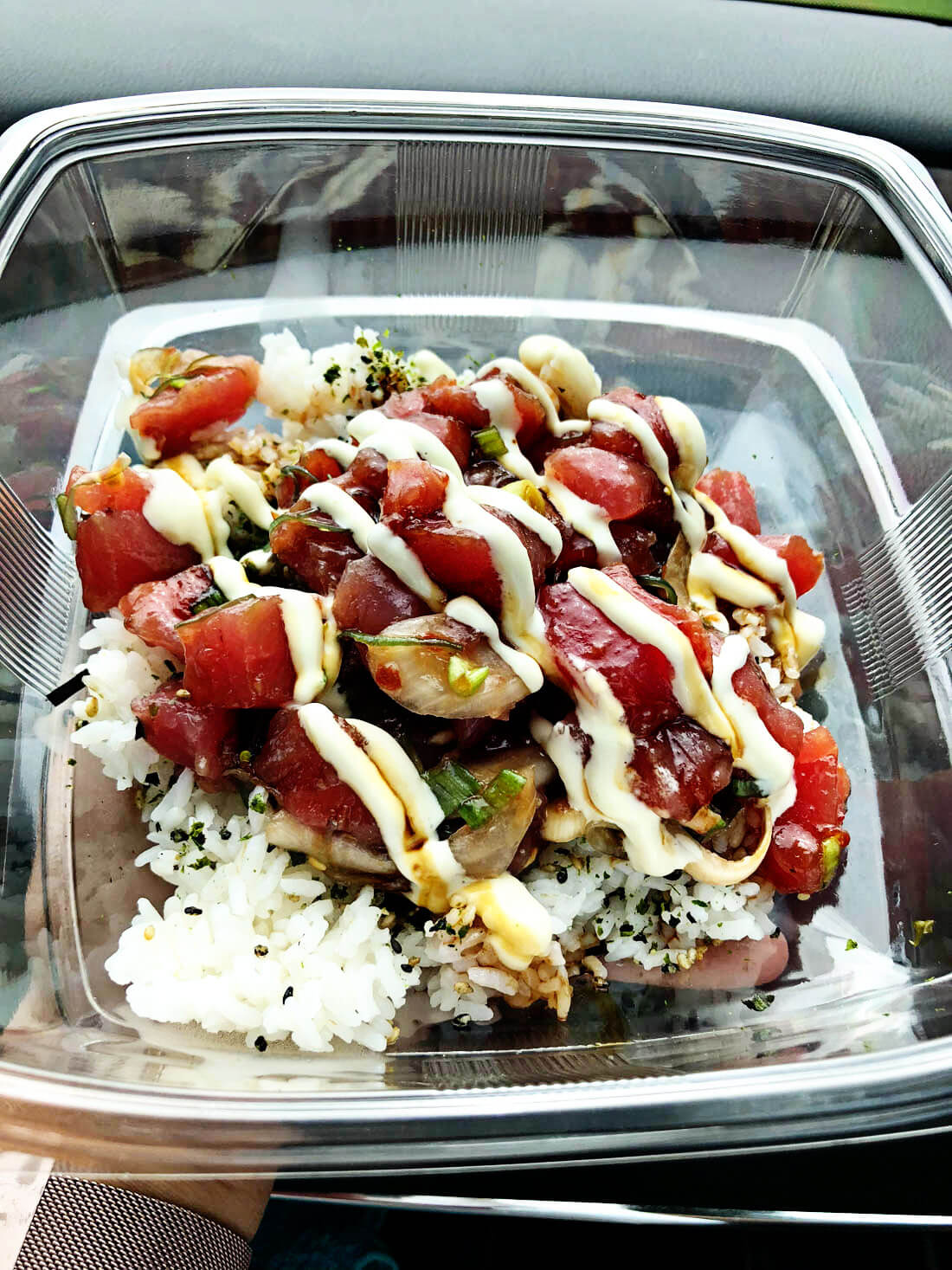 I got this salad four years ago and have tried to get it probably five times since.  Every time I went, they were closed or out of pork belly! But on the last try this time, they were open and had it! 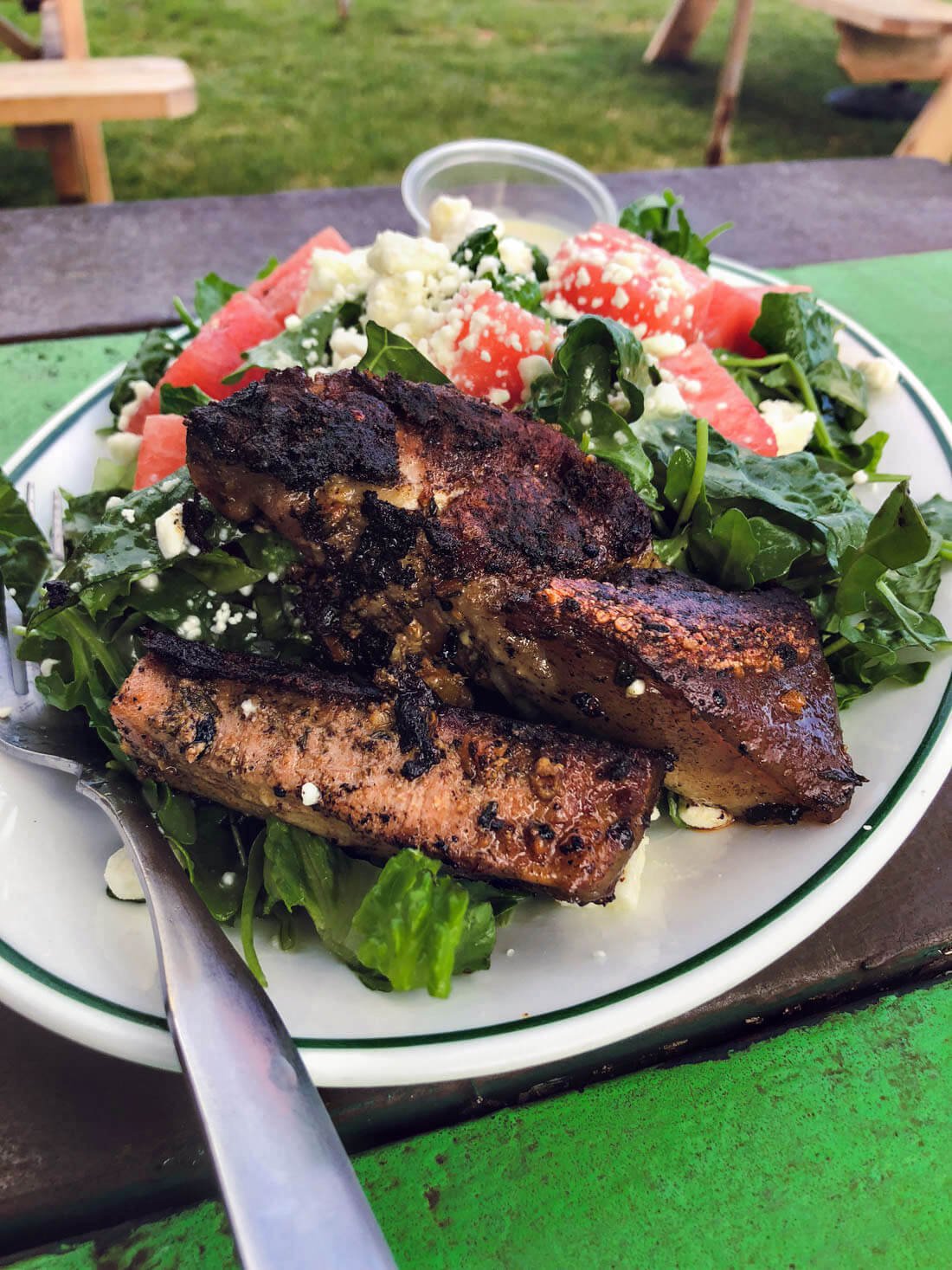 Macadamia Nut Cinnamon Roll from the Hanalei Wake Up Cafe

This little place was one of our first finds back on our first trip to Kauai.  We had the Mac Nut Cinnamon Roll and Over the Falls French Toast.  It has been a favorite ever since.  If I am up in the north of the island, I have to stop here to get a cinnamon roll.  There’s nothing quite like it! 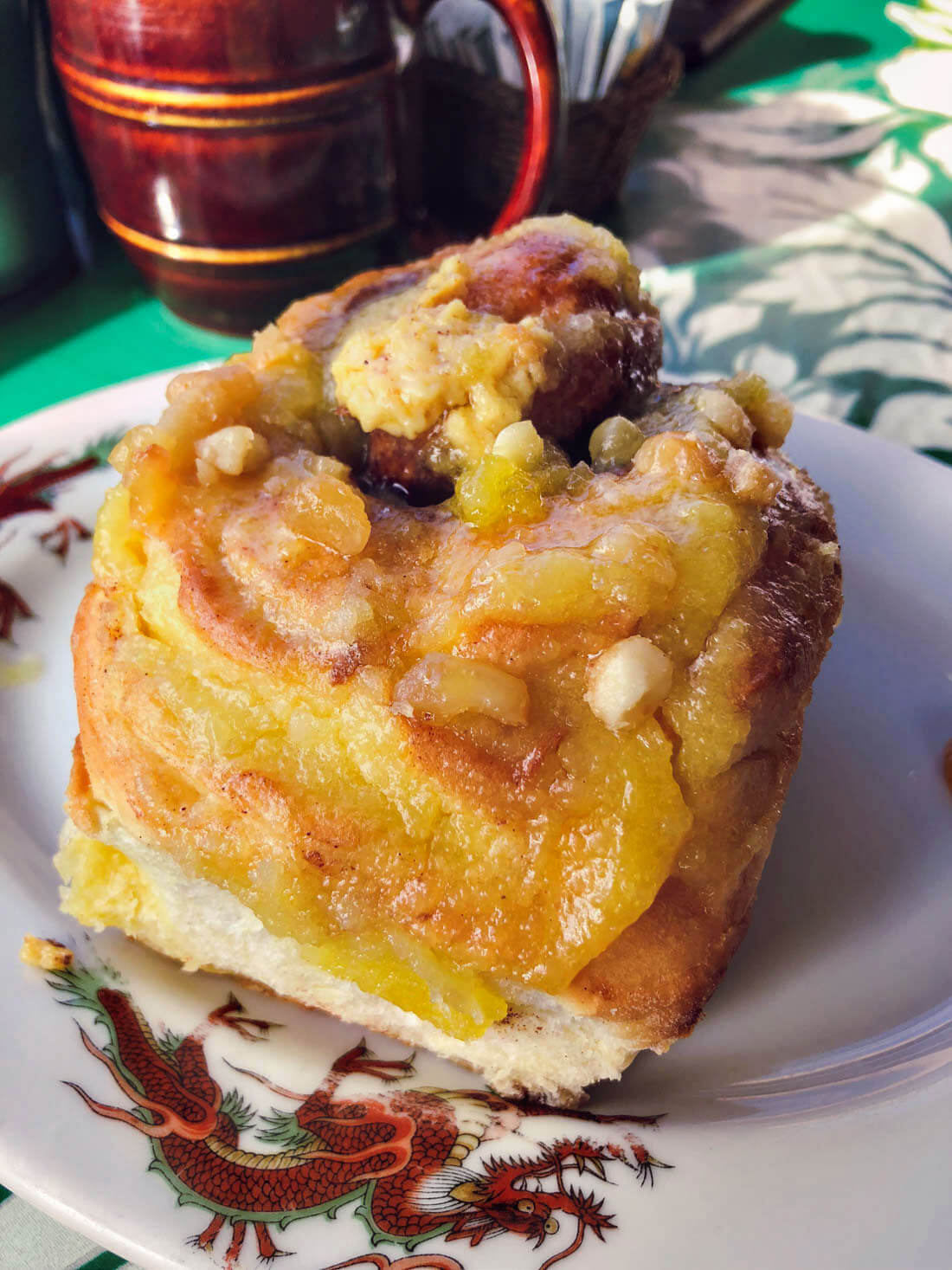 I’m pretty sure that “Banana Pancakes” by Jack Johnson came from him visiting this spot.  The pancakes are the best I’ve ever had.  Josh got pineapple and I got banana with macadamia nuts.  HEAVEN.  The atmosphere feels like Alice’s Diner or something and supposedly it’s where the locals go.  Definitely worth the stop and we will be going back. 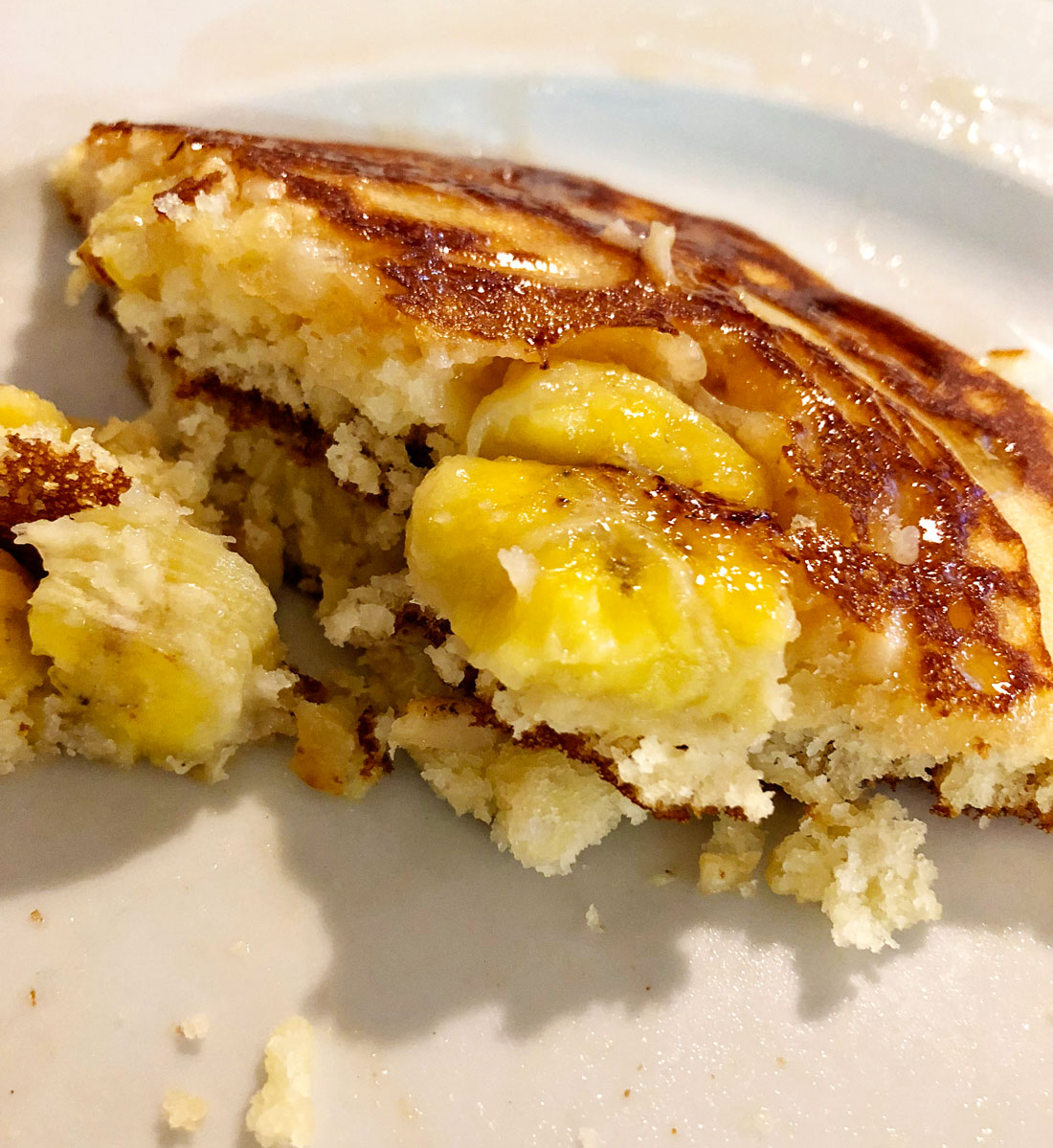 Other restaurants we tried this time with mixed reviews:

The Not as GOOD:

Although none of the food we had was straight up bad, there was just so much good that these are places we probably wouldn’t go back to. 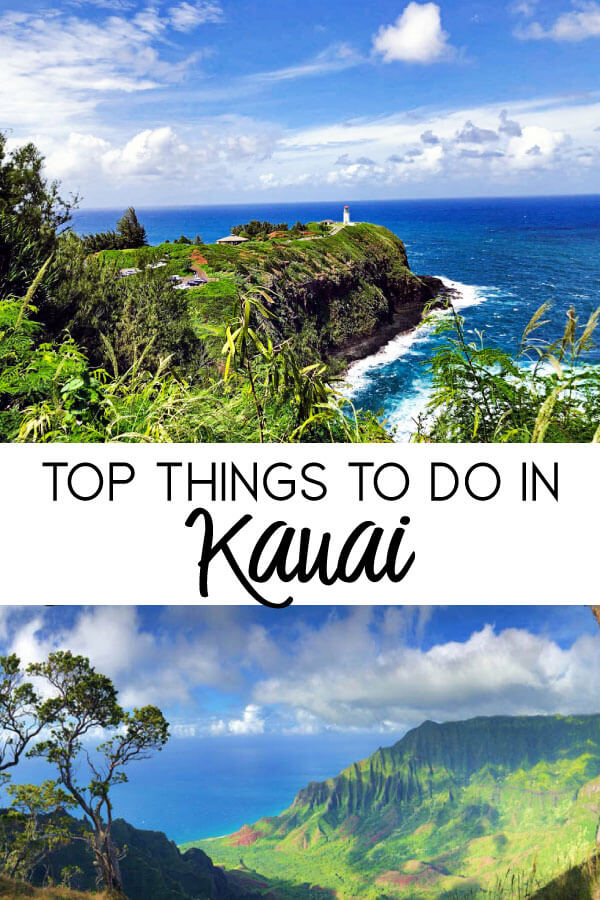